Ceiling Fan Installation And Why They Are Effective For Cooling 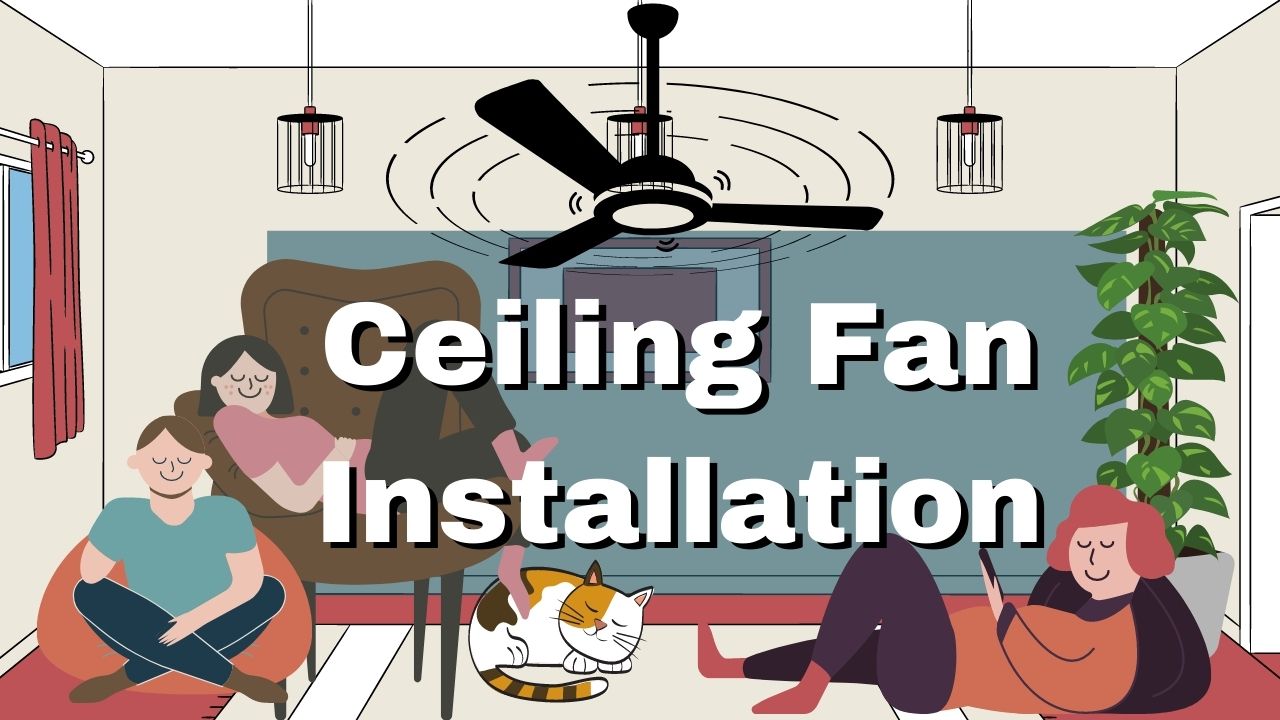 The fans are suspended from a room’s ceiling, and the rotating blades circulate the air and cooling the people who can feel the moving air.

Interestingly, ceiling fans don’t actually lower the temperature of a room, they work by cooling people down by evaporation.

In hot weather, when the body is trying to cool itself down, you sweat. When air moves over sweat, it cools the skin down, and this is why a fan feels so great on a hot day.

Ceiling fans when used with your air conditioner are very effective at cooling down a home and saving on energy costs.

Ceiling fans are great for improving indoor comfort while saving energy and money.

Unfortunately, homeowners are struggling with higher energy costs, and it’s only getting worse.

So it’s never been late to consider installing ceiling fans to help your air conditioner become more efficient and save on power costs.

In the summer, a ceiling fan may keep you cool without turning up the air conditioning to maximum capacity, saving you energy and money.

In addition, setting your thermostat higher while a ceiling fan is running can save you up to 40% on air conditioning costs.
Studies show that this can make a room feel up to seven degrees cooler.

They Also Help With Heating

In winter, they can also help save on heating costs.
Heated air rises, and putting a ceiling fan into reverse on the lowest speed setting will help push the hot air back down into the room.

It is essential in rooms with high ceilings and will save energy and money by circulating the warm air and allowing you to set the thermostat lower.

To get maximum performance, choose the right fan for your room size.

For long or large rooms, consider more than one fan to meet your cooling needs.
For maximum comfort, place the fan as close to the centre of the room as possible.
Keep the blade tips at least 18 inches from any wall for ceilings lower than six feet.

For ceilings higher than six feet, the fan should be suspended with a rod extension to be at the height of three to four feet above the floor.

It would be best to hang it at this height because the higher the fan is suspended above eight feet, the less air will circulate near the floor.

Want a ceiling fan for a covered outdoor patio?
Opt for an outdoor ceiling fan that is UL listed for wet areas.
They have protective motor covers that prevent moisture from corroding the motor.
The fans will usually have plastic blades that will not rust like metal blades or warp like wooden blades.
Having an outdoor fan might seem unnecessary, but they are a great addition to any outdoor entertainment area.

On a hot day when there are not many breezes to cool you down, the airflow from the fan will keep everyone cool and happy outdoors.

The other benefit is that the airflow from a fan helps keep midgies and mosquitoes at bay as they avoid being out when it is windy.

The fan blades determine the volume of air that circulates in a room.
Fan blades must be weighted and matched as a balanced set to prevent fan wobble. Ceiling fans with an angle less than 12 degrees do not circulate air and are less efficient. The higher the pitch of the blade, the more air circulation you will have in your room.

The motor is responsible for quiet operation while driving the blades for air movement. Look for high-quality motors with heavy-duty windings and sealed bearings that are permanently lubricated. Smaller, less powerful motors found in inferior fans can cause higher operating temperatures, reduced airflow and noisier operation. 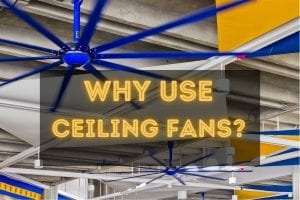 Does Leaving A Fan On Keep A Room Cooler?

Fans do not make a room cooler. They do not lower the temperature in a room; instead, they reduce your body temperature by blowing air over your skin.
So, if you are not in the room, a fan being left on will not make it cooler.

However, this rule does have an exception: if the air temperature outside the house is cooler than the air inside, then a fan near a window can help draw cool air into the place or create cross-flow to remove some of the hot air trapped inside.

The other benefit of a fan being left on in humid weather is that they keep the air circulating which can lessen the chances of mould and mildew.

Do Ceiling Fans Increase The Value Of A Home?

Adding ceiling fans to rooms like bedrooms, the living room, or the family room instantly increases the value of your home.

What Is The Trend In Ceiling Fans?

After hours of searching, I have picked out the latest stylish ceiling fans.

The Minka Aire Roto ceiling fan is simple, sleek and quiet and available in five pretty colour options. It was the most recommended. If you’re looking for a discreet fan and blends in with its surroundings, this fan in white is a great choice. Also, check out the beautiful Coal and Driftwood colours.

Pretty ceiling fans that include a light are tough to find! However, I love the Hunter Hepburn fan, which has a stylish globe light and blades that change from white to aged oak.

If you have ample space that you are looking for a beautiful ceiling fan for and also have a generous budget, this 60″ Peregrine Industrial fan is gorgeous! This design is simple yet elegant, and there are various colour/finish options that you can choose.

The Westinghouse Industrial 56″ ceiling fan is the most modern and budget-friendly of the fans on my list. I love its sleek and simple design. It’s a great fan designed for industrial spaces and recommended for a large room with high ceilings.

The Xeno ceiling fan is another pretty fan that is suitable for both indoor and outdoor use! It is available in three different colours – white, dark bronze, and brushed nickel.

Why Do Ceiling Fans Make Noise?

When something is wrong with a ceiling fan, it can start making annoying noises.
These noises can keep you awake at night, and if left unchecked, they can cause damage to the fan and risk causing an injury if the fan comes away from the ceiling.

Different problems with a ceiling fan cause different types of noises. Therefore, it is vital to determine the exact cause of the annoying ceiling fan noises so that you can fix the problem correctly.
Remember that you must use an electrician to repair or replace any ceiling fan in Australia.

A fan coming loose or the blades coming loose can cause some noises and a reason why the blades are wobbling.
As long as you do not remove any part of the fans casing, you can check that all the visible screws are tightened.
Always turn the power off at the switchboard before you touch any electrical component. 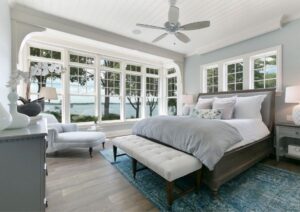 We all know what a typical ceiling fan looks like. They are generally white, and they sit gathering dust when not in use.
They are not very attractive, and they have one function only, which is to circulate air.
In the last ten years, ceiling fans have grown in popularity due to the different designs that are now available.
Many new ceiling fans also now have retractable blades.
This means the blades are tucked away out of sight when not in use.
There is no more dust collection during the cooler months, and they look a lot more stylish than a regular ceiling fan.

As the name implies, a bladeless fan has no visible blades and blows air.
The blades are out of sight in the fans motor.
The air is sucked in and then pushed out and uses aerodynamics and physics to give the airflow strength.

The airflow is not as forceful as a traditional fan, and this makes it more comfortable to be under the fan as you are not being buffeted by the breeze a standard fan creates.

Is A Bladeless Fan Better?

Bladeless fans are the latest trend in the fan industry. It is compelling as it multiplies the outgoing airflow, providing much better cooling. In addition, a bladeless fan has many advantages over traditional fans.

When To Call An Electrician For Your Ceiling Fan

An electrician must be used for all ceiling fan repairs or replacements.
In Australia, all mains connected electrical wiring contains 240 volts.

Trying to do your electrical work can result in death, and if there is an electrical fire, it will not be covered by your insurance.

Call a Brisbane Electrician to fix any problems with your home’s cooling system as soon as possible.