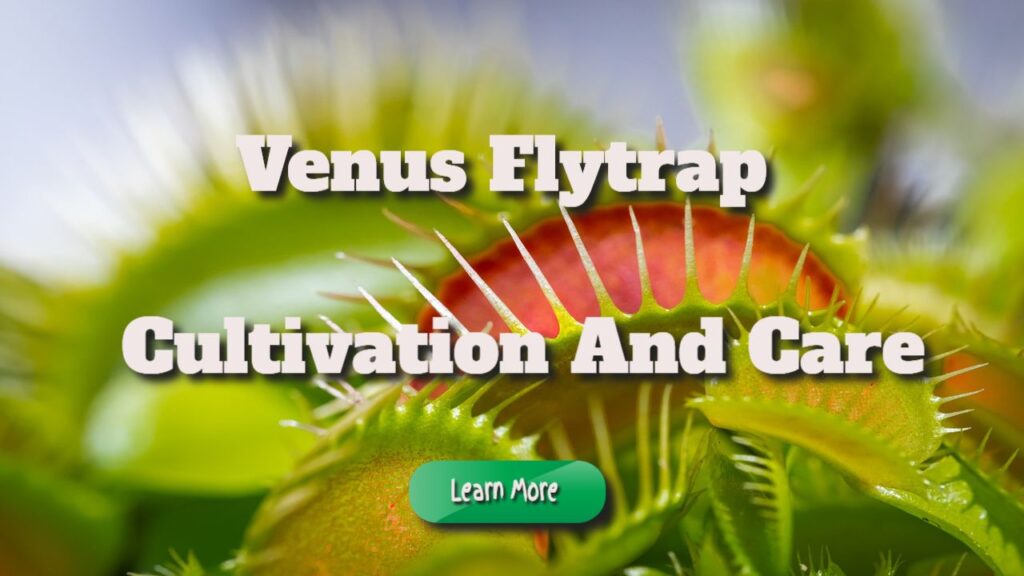 Venus Flytrap Cultivation and Care: A carnivore that thrives as a houseplant.

The Venus flytrap (Dionaea muscipula) is one of the world’s strangest plants. People cultivate it for the impact rather than the appearance:

It exists on flies.

This makes it one of the most appealing plants to grow, particularly for children who can spend hours watching it “eat.”

The “trap” of a Venus flytrap is a modified leaf. There can be up to eight of them on a plant, and they grow from flat stems (technically part of the leaf) that create a rosette at the base.

The Venus flytrap isn’t the only plant with an altered leaf. Another example is the purple pitcher plant (Sarracenia purpurea subsp. purpurea).

This leaf is composed of two lip-like lobes joined by a hinge. The nectar inside the trap acts as bait, drawing the beetle inside and killing it.

When the bug inside hits one of the trigger hairs, the trap shuts and confines the prey inside.

Enzymes digest the bug between 4 to 10 days.

The “jaws” reopen after digestion.

Dionaea muscipula is the botanical name.

Upkeep of the Venus Flytrap

Because Venus flytrap is bred to be watched up close, it is typically grown as a houseplant in a container, where its unique behaviour may be examined more easily.

A Venus flytrap’s care is no more complex than many other houseplants, but it demands special surroundings.

This carnivorous plant requires live flies, mosquitoes, and gnats to survive. Insert the bug into the trap with tweezers until it hits a trigger hair.

Because a Venus fly trap can only open and close so many times during its lifetime, keeping track of when you feed it is critical.

Remove the blossoms when the plant begins to flower in May or June. Flowering results in the development of seeds, which depletes the plant’s energy.

The predatory effect of the Venus flytrap is more critical than its blossoming beauty.

From spring to fall, you must ensure that your container plant receives at least 12 hours of sunlight daily. Four of those hours should be spent in direct sunlight.

The Venus flytrap thrives when watered with rainwater rather than conventional tap water.

Install a rain barrel or leave a container outside to collect rainwater. Distilled water should be utilised if rainfall is not available.

Do not fertilise. The Venus flytrap thrives on nutrient-deficient soil. 3 It behaves exactly as it does in its natural bog habitat.

Plant breeders have created numerous varieties of this unusual plant. Cultivars have vibrant names that emphasise the bizarre nature of the Venus flytrap.

These cultivar names are often highly descriptive, highlighting a distinct quality that sets the cultivar apart from the many others. Here are a few examples:

Dionaea ‘Petite Dragon’ is one of the smallest Venus flytraps, measuring only half an inch in diameter.

Dionaea ‘Ginormous’ traps are at the opposite end of the spectrum, measuring 2.25 inches in diameter.

‘DC’ Dionaea Color is the most visible difference between the many species of Venus flytraps. Most traps have some green in them, while some are fully green.

Others may combine red, yellow, green, and purple. The ‘DC All Red’ variant is entirely red. 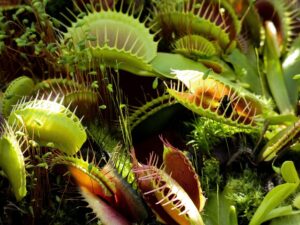 The division is the simplest and most reliable method of propagating the Venus flytrap.

Mature plants will develop offshoots in the early spring. Cut them off at the base with care to avoid injuring the roots.

Fill pots 4 to 5 inches wide and at least 6 inches deep with new peat for growing media. Each pot must have a hole drilled through the centre.
Fill up the holes with the trimmings. Maintain a steady moisture level in the soil and water it frequently.

Protect the container from direct sunlight while allowing the plant to receive light.

Because of over-collection and habitat degradation, wild populations of Venus flytrap, like those of other native species, have declined substantially.

This plant should never be plucked in the wild; instead, it should only be obtained from nurseries that propagate their plants.

The Venus flytrap is in the process of being potted and repotted.

The Venus flytrap prefers a more acidic soil mix than most houseplants. Because peat moss acidifies the soil, a mixture of soil and peat moss or horticultural sand and an equal amount of peat moss is effective.

Wood items with low pH, such as bark, sawdust, or wood fibres, are a feasible and ecological alternative to peat moss.

Check to see if the timber has been chemically treated. Coconut fibre, a sustainable alternative to peat moss, is inappropriate since its pH is nearly neutral.

The plant stays dormant in the fall when daylight hours and sunshine decrease. It then loses its leaves and looks to die, even though it lives underground via rhizomes.

This is normal, and you should not utilise artificial light to make up for the shorter daylight hours.
Reduce the amount of water and place the plant in your home’s most beautiful space. Give it just enough water to keep the soil from drying up entirely.

When the plant re-emerges in early spring, resume regular watering to keep it moist at all times.

Plant pests and diseases that are common

Although you might think that a bug-eating plant would be immune to pests, the Venus flytrap is occasionally attacked by aphids and fungus gnats.

Because the bugs are so small, the plant cannot collect and consume them. Horticultural oil or insecticidal soap can aid with severe aphid infestations.

Is it possible for a Venus fly trap to injure humans?

Even if you mistakenly insert your finger into one of the traps, the result will not be painful.

Avoid poking your finger into the trap, as this will reduce the plant’s energy, which should be utilised to collect and eat insects.

The herb is not poisonous to pets.

What is the origin of the name “Venus flytrap”?

The genus name (Dionaea) and the first half of the common name are associated with the Roman goddess of love because to the plant’s stunning white flowers.

The species name muscipula (Latin for “mousetrap”) most likely refers to the closing “jaws,” which resemble a mousetrap when released.

Where is the Venus flytrap native?

They can only be found in the Carolinas.