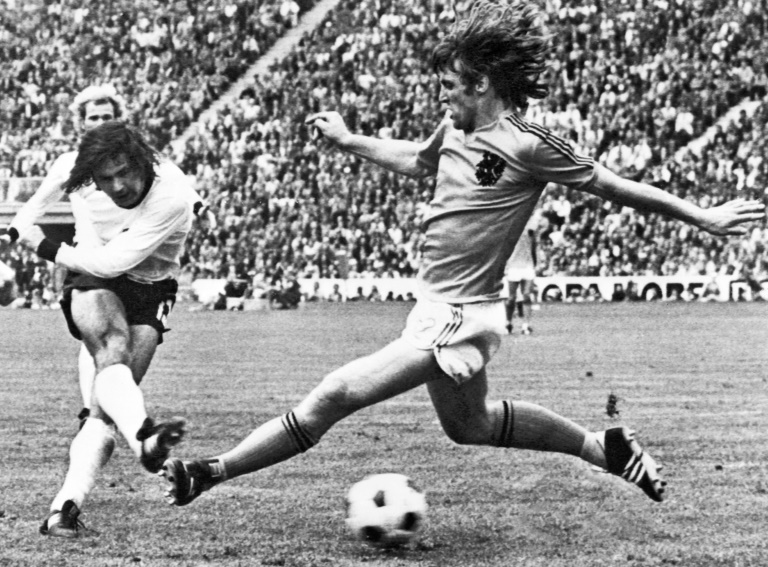 Berlin (AFP) – Gerd Mueller remains one of football’s greatest strikers of all time, even after Robert Lewandowski equalled his 49-year-old Bundesliga record of 40 goals in one season, a landmark which many thought would never be matched.

Lewandowski wouldn’t have it any other way.

“What Gerd Mueller did is incredible. Sharing the record with him makes me very, very proud,” the Polish star said Saturday after scoring in the 2-2 draw with Freiburg.

Mueller, now 75, lives in a south Munich nursing home for patients with severe dementia and had not been aware his record was in danger — unlike his wife.

She has been hearing about “nothing else everyday for weeks”, Uschi Mueller told magazine Sport Bild.

Mueller would not hold it against Lewandowski for matching her husband’s record.

“Quite the opposite: he would be the first to offer congratulations, to say: ‘Well done, boy. You did well’.”

Mueller earned the nickname “Der Bomber” for his goals, having scored 68 times in 62 internationals for West Germany.

His total of 365 Bundesliga goals seems out of reach, even for Lewandowski who netted his 276th German top-flight goal on Saturday.

“Without Gerd Mueller and his goals, this club wouldn’t exist in its current form,” said Bayern forward Thomas Mueller who has spent this entire career at the Bavarian giants.

“His goals made this club what it is.”

He scored twice in the 1972 Euro final in a 3-0 win over the Soviet Union, then his shot in the box two years later in the World Cup final sealed a 2-1 win over the Johan Cruyff-inspired Netherlands.

Many thought his 40 goals in 34 Bundesliga games in 1971/72 would never be matched — until Lewandowski’s exploits this season.

Paul Breitner, a former team-mate of Gerd Mueller, says Lewandowski is the first player he has seen with the “huge quality and a greed that I’ve only known from Gerd in five decades, who was never satisfied and would have loved to score 10 goals in every game”.